The golf club was founded in 1908 when two separate landowners allowed some ground for a few holes to be established. Apart from the war years it has operated continuously since then and has steadily been developed into its current state, maintaining a 9 hole golf course for use by members and visitors.

In December 1996 the club purchased the land on which the course lies plus additional ground for eventual expansion. This was a major step in securing the club’s long term future. It has enabled us to commence the process of upgrading our facilities.

The committee considered a comprehensive range of options including improving and extending the course and the building of a clubhouse. Although comprehensive plans were approved for an extension to enable a longer 9 hole course and eventually a full 18 hole course to be built, priorities were agreed as:- drainage improvements to the existing course, establishing a practice area and developing a clubhouse offering changing and catering facilities.

In May 2004 the club officially opened its clubhouse, standing on a prominent site next to Lochcarron Golf Course and with excellent views over the head of Loch Carron and much of the course. This clubhouse required significant investment which despite considerable local support from Lochcarron Games Association, anonymous donors and fund raising by many members and supporters was only made possible by financial support coming from the Sport Scotland Lottery Fund, Ross and Cromarty Enterprise (RACE) and The Highland Council. The club are most grateful for the support they received for this project.

Concurrently with building the clubhouse, work has continued on improving the course drainage since much water from the surrounding hills drains through the course to the shore. The work is on-going and positive progress is being made as regular players would testify to, but there is still more to be done.

A local community asset which welcomes all

The membership numbers are good with both locals and regular visitors amongst its numbers.

Members are invited to take part in various competitions throughout the year which normally take place on a Saturday for Men and a Sunday for Ladies. Fixture lists can be found here ‘Members’

The club also plays a number of matches against other nearby clubs as well as hosting a Men’s Open competition on the second Saturday in July and a Ladies’ Open on the first Saturday in June. 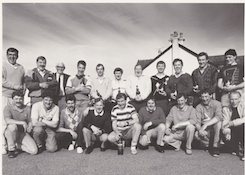